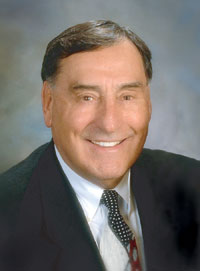 Gene Felker graduated from the University of Wisconsin in 1952 and went on to play in the NFL as a tight end and defensive back for the Dallas Texans.  His ambition did not stop with a pro football career.  Gene has held many key positions in the sports industry.

He worked as a scout for the Baltimore Colts and the Seattle Seahawks, served as President and Founder of National Coaching Clinics, became co-owner of Bart Starr Sports Camps, and worked as the Vice President of Marketing for the NFL Alumni and Executive Director of the Sun Angel Foundation.  With his education degree and love for football, Gene went on to become a successful football coach at Drake University, Oregon State University, University of Wisconsin and Arizona State University.

In 1997, his bright career and future looked grim as Gene’s health took a potential fatal turn.  Through a routine blood test, Gene’s doctor discovered he had prostate cancer.  With few options open to him, Gene went ahead with the treatment available and underwent surgery and radiation treatments.  His treatments were successful and his cancer is now in remission.

During his difficult journey, Gene learned more than just the effects of cancer itself.  He discovered there was very little money being raised to promote the awareness, education, and research into prostate cancer.

So, in 1998 Gene began the All Sports Foundation, a 501(c)(3) non-profit organization dedicated to raising funds for the awareness, education, and regular testing for prostate cancer.

As always, Gene has called on old friends and business associates to help further the cause.  He especially calls on his daughter, now CEO Marla Zimmerman, and Georgene, his wife, for their unwavering support and countless contributions of time and energy.